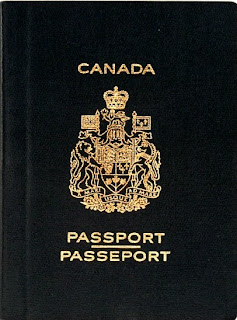 While I don't often find faults with my country, there is one thing I would change in an instant if I were the PM or an MP or the GG (or whatever official has control over this issue); I would make Canadian passports valid for 10 years. Getting a new passport every five years is much too troublesome and, I suspect, simply a ridiculous money-making ploy. If Canadian passports only had to be renewed every 10 years instead of every five, my passport would not have expired today.

I guess I can be thankful that the new land and sea travel requirements between Canada and the U.S. have been postponed so many times in the past year. First, the new law was supposed to be in effect in January 2008. Then it was pushed back to June 2008, and finally, the Canadian and U.S. governments postponed the new rule until June 2009. So, luckily, I will be able to return to Canada once this semester is over. Hopefully, renewing my five-year passport will be done long before I need to come back to school in August. In any case, at the time of this posting, the law will change in only 96 days, 21 hours and 3 minutes. So, if you need to get a passport, or, if you're Canadian and your passport will expire soon, you should probably get that looked after. I'll be debating writing to my MP to see what can be done about the passport-that-expires-after-five-years situation.

If you've never read the intriguing story about my previous passport, and would like to, click here.
Posted by Ali at 22:34