My family flew back to BC last night from western Ontario where we went to my cousin's grad and visited relatives. When my mum listened to the messages on the answering machine at home, I breathed a sigh of relief when the messages ended without one from the kennel owners where our dog, Pepper, stays while we're traveling. Just before our trip we found out the results of her latest visit to the vet. She had diabetes, liver disease and arthritis in her back legs. The vet suggested what we had all assumed; we should put Pepper down. We decided to wait to put her to sleep until after our trip when we could say good-bye properly. I, in particular, felt that it would be rather crude to put her to sleep in a rushed and last-minute decision just for our convienience. The kennel owners understood and said they'd take care of her while we were gone. Before leaving for Ontario, I said good-bye to Pep, just in case, and now I'm glad I took the extra time. I told her to hang on until I got home, but she didn't quite make it. She waited until yesterday.

One second before my dad broke the news to my siblings and me at work today, I knew what he was going to say. And when I heard the words "Pepper died" I was surprised at the relief I felt. I knew that she was in pain, but had secretly (and selfishly) wondered if I would be strong enough to let her go when we came home. She was a great dog and a loyal friend. I'm glad Pep chose her own time to go and isn't suffering anymore. Even so, she was my best non-human friend and will be missed terribly by our whole family.

Just a few of the memories we shared with Pepper 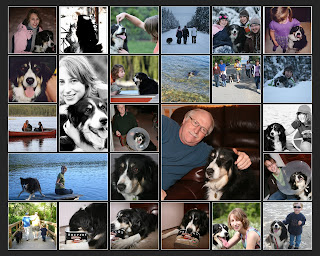 From a cbc.ca article on how the Web has affected the news and the media.

"Definition: Web 2.0 is a term that is generally applied to the second generation of internet applications that first began to appear about 10 years ago. The dominant trait of Web 2.0 is its interactivity: ordinary people can easily contribute to online discussions, and not remain simply on the receiving end of information."

As I read the article the following paragraph jumped out at me. It puts into words my thoughts on the subject since becoming a journalism major.

"There is much to celebrate about this democratization of the media, but there are also reasons to be concerned about the loss of an independent, professional journalistic filter at a time when everyone can be their own media. Can online communities of 'citizen journalists' be counted on to help us make informed choices as citizens and consumers? What's lost, and what's gained when 'News 1.0' gives way to 'News 2.0?'"

While the involvement of everyday citizens in the media can provide new opinions and generate discussion, many of these people haven't been trained as reporters and news quality could suffer because of it. After several years of journalism classes and experience, I'm still not completely sure how I feel about the traditional media audience becoming involved in what we read, see or hear. How long will it be before citizen journalism negatively affects news quality? Has it already been too long?

Bryn, Mum and I took a day trip to the Vancouver area yesterday to pick up my passport and then spent the rest of the day driving around the Fraser Valley looking for new and interesting places to explore. We eventually arrived at Rolley Lake Provincial Park after driving though Fort Langley (a historic town that started as a trading fort) and waiting in an hour-long line for a ferry that took only about 8 minutes to cross the Fraser River. Inside the park, surrounded by mountains, sat the exquisitely calm Rolley Lake. Mum got 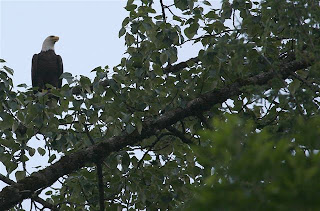 out her camera and took advantage of the perfect evening lighting in the serene setting. The highlight of the day was when a bald eagle soared overhead and settled in a tree to intently watch a couple fishing on the other side of the lake. I tried to lure the eagle from its perch so Mum could get a picture of it flying by pretending to be a bird, but apparently I wasn't too convincing and the eagle stayed on its branch. By the time we started home, my friends, Jodi and Nik, driving out from Alberta to visit, were almost to our house. They got there an hour and a half before we got home, but Ty entertained them by making Wii characters until we arrived.

After work today, I drove downtown and met Jodi and another one of our high school classmates, Melissa, and her baby, Garrett. We had just starting on a walk around City Park when we saw some people we knew and talked to them for a bit. Then we headed to the beach. Jodi had been looking forward to swimming in Okanagan Lake for weeks, but as we touched our toes into the frigid water, our resolve to swim faltered. In the end we both decided to brave the water and dunk under the icy waves. This is the earliest I have ever gone swimming in Okanagan Lake. I felt like I had accomplished a great feat, until I remembered that earlier this week a girl training to swim the English Channel had swam in Okanagan Lake for 6 hours. My pride readily shrank back to a reasonable level.

----------
On the subject of exploring and conquering: -Scientists are adding a new element to the periodic table. -Tomorrow is the full switch from analog to digital TV broadcasts in the U.S. It should be interesting to see what happens, especially to those people still unprepared for the switch. -The Pittsburgh Penguins will be in Detroit tomorrow to take on the Redwings in Game 7 of the Stanley Cup Final. These same two teams played for the Cup last year with Detroit winning in 5 games. For that reason alone, I hope the Penguins win this year.
Posted by Ali at 22:55 1 comment:


When I was a little kid, I dreamed of owning a machine that could provide me with any book I wanted to read. Today, as I browsed through cbc.ca, I read a feature article and discovered that my childhood fantasy has actually been invented! (Note: The article is actually about a million times more interesting than the video clip, but I figured I needed some type of visual in this post.)

The next time I find myself in one of the few public or university libraries that house one of these amazing machines, I'm going to try and print out an on-demand book for myself. For more details see OnDemandBooks.
Posted by Ali at 16:31 3 comments:

While at school I regularly read the news online (like every good Communication student should), but once I'm home I forget to keep up with current events. I spend the majority of my free time reading all the books that I never had time to read while at SAU. I do keep some sense of what is going on in the world because I sometimes overhear the news when my dad watches it at 5 or 11 p.m. (my bedroom is right beside the TV room) and I occasionally listen to the local news on the radio as I'm driving around town. However my world knowledge isn't as up to date in the summer as it is during the school year. Today at work, I realized that I hadn't actually read any online news since I left school, so I decided to dedicate my lunch break to catching up with what's happening around the globe. Here are some of the interesting (at least to me) articles that have gone to press in the past couple days.

1st: The last survivor of the Titanic, 97-year-old Millvina Dean, died yesterday, which, interestly, was also the 98th anniversary of the Titanic's hull being launched.

3rd: Border officials (both Canadian and American) began requesting passports from visitors to either country as the WHTI — the U.S.-legislated Western Hemisphere Travel Initiative — went into effect today. CBC reports, "The new ruling requires anyone from the Western Hemisphere entering the United States to produce a document that contains photo identification and proof of citizenship." Canada decided to go along with the U.S. in applying the law which will make crossing the world's largest undefended border more difficult for North Americans. I personally was flabbergasted to read the negative comments on the passport story. I've know about these new rules for years now, especially since the date kept getting pushed back in order that everyone would have adequate time to apply for a passport. I'm actually not sure how anyone these days can survive without a passport. I was also surprised, and quite amused, after reading George W. Bush and Bill Clinton's reactions to the new border rules (scroll halfway down). How can these two former presidents not even have heard about the WHTI.

4th: The world's largest jetliner, the double-decker Airbus A380 with room for up to 800 passengers on board, made it's first commercial landing in Canada this morning at Toronto's Pearson International Airport. The Emirates Airlines plane will fly between Dubai and Toronto three times weekly.

5th: Also flying related, a Canadian astronaut, Bob Thirsk, packed several Canadian mementos along for his six-month stay on the International Space Station. This trip involves a lot of first for Canadians in space (read the article for more specifics) and I think it's pretty cool that Thirsk hails from BC.
Posted by Ali at 13:06 1 comment: