Trip by the Numbers

Bryn, Tyler and I made it home just before 10 p.m. yesterday. It was a long trip, but we had so much fun driving across the country together. We met our parents at Yosemite on Monday afternoon and had a mini vacation together for the last few days of our travels. All in all, it took us several hours more than a week (even with crossing time zones and gaining three hours) to get from Collegedale, TN to Kelowna, BC. That's definitely the longest we've ever taken to get home and by Thursday night Bryn, Ty and I all just wanted to be back home. But we made a lot of interesting stops for fun excursions during our trip, so that's why it took the extra time. Here are some random number-facts about our latest excursion.

Miles driven: 4,095.4 (6,590.9 km)
Hours spent traveling: 180.5
States driven through: 11 — plus 1 province, obviously
Interstates taken: Five — I40, I15, I5, I205 & I84
National parks/areas visited: Three — Yosemite N.P., Crater Lake N.P. & Oregon Sand Dunes National Recreation Area
Other attractions seen/visited: Hoover Dam (way too hot and way too many people to get out of the car), Las Vegas strip (definitely counted as an attraction) & the Stratosphere in L.V. (not nearly as exciting or tall as we imagined)
Wildlife seen: Numerous deer, golden eagles, squirrels & sea lions, plus 1 whale (seen only by me)
Animals hit: One — by my dad just after leaving Yosemite at night (It was too dark to see what it was, but I'm convinced it was a sleek, long-tailed baby panther, Bryn's sure it was a fuzzy, curly-haired dog, and Mum claims to have seen the ink-black wings of a huge raven.) 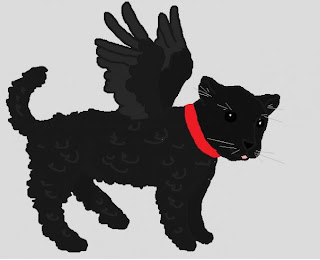 (Thanks to Kevin for this depiction of the mysterious animal.)

Oceans seen/waded in: One — the beautiful Pacific
Notable mountains seen: Six — Half Dome and El Capitan at Yosemite, Mt. Shasta, Mt. Hood, Mt. Ranier & Mt. Adams
Times pulled over by a cop: Two — Our parents both times for "possible drunk driving/driving too slowly and hesitantly"
Tickets received: None
Pictures taken: Still being tallied, but, with four cameras along and our picture-loving mother on the trip, the number is definitely in the thousands.
Posted by Ali at 21:13