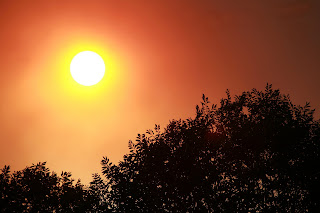 I looked into a beautiful clear blue sky with puffy white clouds as our family drove to Kelowna International Airport. We were going to pick up my older sister, Becky, at the airport and then spend the rest of the Sabbath relaxing in the gorgeous Okanagan summer weather. After a happy reunion at the airport, we loaded Becky's bags into the back of the truck and started for home. As we drove down Hwy 97 back into Kelowna, my mum called, "Look at the sky." All six pairs of eyes immediately scanned the horizon and then stared at a huge plume of smoke rising between two mountains in the west. I said what we all instinctively knew. "Forest fire."

The residents of the Okanagan Valley are no strangers to forest fires. Six years ago, on August 16 (ironically another gorgeous summer Sabbath), a lightning strike started an enormous fire in Okanagan Mountain Provincial Park that devasted the park, decimated the crownland forest and burned more than 230 homes on the edge of Kelowna before it was contained. There have been a few forest fires nearby in the years since 2003, but none have been near as huge or as dangerous as that firestorm. Now we are facing the fear and uncertainty of fire threatening our town again.

When we got home, Tyler, my mum and I looked at the local news website and learned this new fire was in West Kelowna, a town across Okanagan Lake from the city of Kelowna. The fire started in Glenrosa, an area northwest of the town. One of my high school classmates lives right near where the fire originated and her family was immediately evacuated. We also have an Adventist church in the area. Our church pastor and my high school French and choir teacher live nearby. They might have been evacuated during the night.

A little while after we got home, some of us headed out again to find out more. We crossed the lake and watched the fire from the highway when we got caught in traffic. We found a place to turn off and drove to a park right on the water where we watched the helicopters fill their buckets with water and fly off to fight the fire. Water bombers were dropping fire retardant on the edges of the fire to try and keep it from spreading. After watching them work and cheering for them as they swooped down low to the water, we drove back to Kelowna. Later on in the evening, Bryn, Tyler and I walked up a few streets to a high point that looked over the whole town. The Glenrosa fire looked like it was getting a little less smoky. But as we started back down, I happened to look north and saw smoke-clouds coming from the mountains west of our airport. We quickly went home and checked the news again. There was a new fire, also across the lake, but miles north of Glenrosa. This fire started in the Terrace Mountain area. My family just took a quad trip to the top of Terrace Mountain two weeks ago when we were camping on the west side of the lake. I know there are many dry trees in the area, destroyed by pine beetles. After sundown worship, I kept up with the fires' progess by reading all the local news reports online. I even found out that cbc.ca had the story at the top of the national news all afternoon and evening last night. It's still the highest story on cbc.ca this morning. Around 10 p.m. when I was listening to the radio, I heard reports of a third fire in Rose Valley, only five kilometres north of the Glenrosa fire. My mum, dad, Bryn and I drove up into the mountains near the lake on the Kelowna side and my mum took pictures of the new fire, the only one we could see clearly from that vantage point. When we got home, around midnight, I stopped on our front steps and looked west. There, looking very, very close, I could see the new Rose Valley fire burning brightly.

This morning all three fires are bigger. The helicopters and water bombers, which had to stop working at sunset, have started fighting the blazes again. Despite ground crews working all night, six more houses (nine in total since yesterday afternoon) burned in the Glenrosa area. The Terrace Mountain fire is larger, but no people live in the area, so no one has had to be evacuated yet. 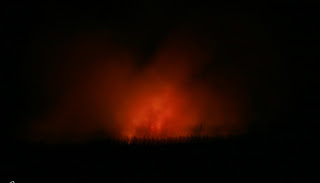 The Rose Valley fire is getting quite close to town and another high school classmate's family is on evacuation alert. They've taken in some people from the Glenrosa fire and now they might all have to relocate again.

I walk outside and smell burning trees. The sky is hazy. Tiny bits of ash float to the ground beside me. And I know the same thing that everyone else in this valley knows. This time, these fires weren't started by a lightning strike...
Posted by Ali at 09:13