Yes, another hockey blog. I'm too excited about my hockey teams to not blog about them. My NHL team, the Vancouver Canucks, just played their last regular season game this afternoon against the Colorado Avalanche. Last night the Calgary Flames (my very least favourite team and huge rivals of the Canucks) and the Canucks were neck and neck in the Northwest Division standings. Each team had 98 points and the Flames had one more win (which means that in the case of a tie, the Flames would win the division). The Flames also had one game in hand over the Canucks. But the Edmonton Oilers did the Canucks had huge favour by beating Calgary 5-1. The fate of the championship was left up to the Canucks in their game with the Avs today. If they lost, the Calgary Flames had a chance to win their last game and take the NW Division lead. But the Canucks prevailed and beat the Avs (now officially the lowest ranked team in the Western Conference this season) by a score of 1-0 in overtime. So the Canucks earned the big two points giving them a 3rd place finish in the standings, ensuring home ice advantage as well as a becoming the NW Division Champions! I can't wait for the playoffs to start! With the current standings tonight, it looks like Vancouver will be playing the first round of the playoffs against the Columbus Blue Jackets. Should be an interesting post-season... 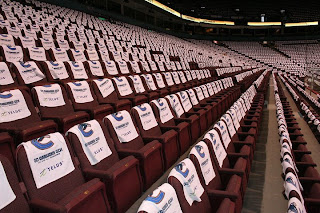 GM Place complete with Canucks playoff towels
(For more info, click here to see what Canuck fans use the towels for)

Now to my WHL team, the Kelowna Rockets. They are my hometown team in a junior-rank league. It's sometimes more exciting to watch juniors because the players are the future stars of the NHL. They don't play for money, but for the love of the game and to try and make it to the big league. They are all heart and that makes the games all the more intense. The Rockets won enough games down the regular season stretch that they came in 3rd in the WHL Western Conference standings. They swept the Kamloops Blazers in four games and moved on to the second round. They are currently up three games to two on the Tri City Americans (a team based only an hour north of WWC...I went to a lot of their games when I was in school there). If the Rockets can beat the Ams in tomorrow's game, they will move on to the Western Conference Championships against the winner of the other Western Conference playoff series between the Vancouver Giants (2007 CHL champions) and the Spokane Chiefs (2008 WHL and CHL champions).

All in all, it's looking to be a good post-season for both my teams and I can't wait to get home and be able to watch some of it unfold. Who knows how far they'll go?! Perhaps all the way to the Cup! 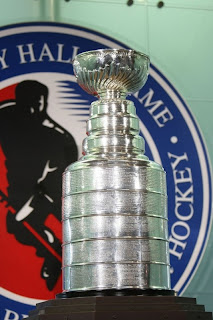