Do you want to live in Canada?

Being Canadian - and proud of the fact that I was born and grew up in this country - I've often wondered how many people from other countries would like to live in Canada. Today I found out. Apparently, according to a Globe and Mail article, "more than half of people around the world say they would abandon their homelands and move to Canada if they could. Given the choice, 53 per cent of adults in the world's 24 leading economies said they would immigrate to Canada, according to an international survey commissioned by the Historica-Dominion Institute in partnership with the Munk School of Global Affairs and the Aurea Foundation."

Interested? Want to learn more? Check out the intriguing graphics below, or read the article. 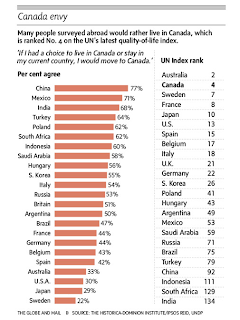 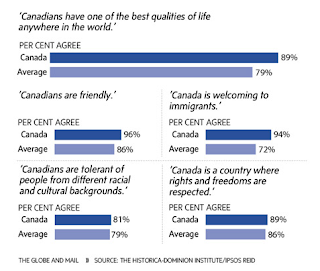 The most surprising thing I learned after reading the article and results of the survey was that a whopping 30 percent of Americans said they would move to Canada. I was amazed. I never thought the number would be so high.

Edit: Here are the results of the survey. 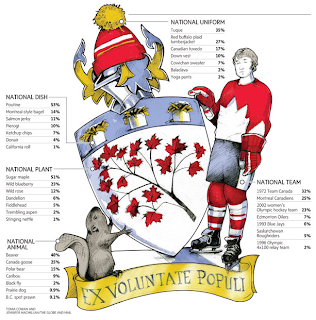 In another fascinating survey result, mentioned in a subsequent article, Swedes were the last people in the world (with the Japanese next in line) wanting to move to Canada. Experts suggest several theories for this, one being that, "Rather than express strong admiration for Canada, Swedes might be inclined to say something non-committal. 'It's not necessarily that they think negatively, they're just not going to express a strong opinion,'" said Canadian-born spacecraft engineer Nils Pokrupa, who has lived and worked in Sweden for the last six years. Curiously, in spite of this non-committal attitude, "years of hockey dominance may have influenced one of the few positive impressions Canadians have made on Sweden. They rose all the way to the middle-of-the-pack on the question of whether Canada has athletes who are among the best in the world."

Note: I guess the Globe and Mail doesn't follow proper AP style. They split percent into two words: per cent. That's a definite AP style no-no. Then again, it is a Canadian newspaper so I guess they probably follow CP style. Maybe I should invest in a CP stylebook...
Posted by Ali at 21:19