The Gift of Nature

Early this morning, when the room was still inky black and the shapes around me barely visible, I woke up. For a few minutes I tried to turn over and go back to sleep, fluff my pillow and go back to sleep, yawn and go back to sleep, until I finally realized I felt completely awake, not sleepy or snoozy or drowsy at all. So I just lay in bed, listening to the sounds around me. Jonathan breathing softly beside me. The odd creak somewhere in the house. The breeze pushing through the Venetian blinds and gently tossing the cord against the slats. The stillness enveloping the room and the world outside.

As I lay listening, the ink faded to slate and then brightened to silver. A solitary honk sounded outside. Immediately I pictured a Canadian goose flying above the house. The honk came again, closer this time, not from the air, but from across the yard. A minute later a rustling in the grass accompanied the nearing honks. Suddenly they came from directly outside the open window. By the time I won the fight against my body to get up and peek through the window, the honks were fading into the distance.

I stayed in bed, warm and cozy, drifting through the early morning sounds until another one, again outside the window, jerked me back from my wandering thoughts. Just a slight sound, but there was something vaguely familiar about it. I turned toward the window, listening intently, but the sound grew fainter. Sighing, I flipped back onto my side, and the sound came back again. This time I was sure I knew what was making the soft crunching. Grabbing my glasses, I slipped out of bed, ignoring the morning chill, and crept to the window. As silently as possible, I slid one slat upwards, then gasped at what I had known all along was outside my window.

A mid-sized fawn covered in faded white dots stood frozen in place, velvet head turned toward me, and stared into my eyes. I dared not move a muscle and stared back into her chocolate eyes. For a minute, we gazed at each other, both alert and watching, neither making a move. Then a small noise from inside the house shattered the still, and the fawn sprang away from her breakfast of leafy ferns, around the corner of the house. Still entranced, I held the slat up for a second longer, craning my neck sideways to try to catch one more glimpse of the deer. As I moved back to the bed, I stopped at the back window, glanced out and spotted two fawns standing near the overgrown garden plot. A sigh of joy escaped my lips, and I scrambled out the bedroom door and into the living room to peer out a larger window with a better view. The two fawns wandered around the garden as I watched in awe of their elegance and grace. Soon one trotted behind a bush and disappeared into the woods, white tail held high. The other stopped and turned, looked back at the house, then jumped sideways, startled by something unseen by me, and bounded into the trees, too. Knowing the two deer were really gone now, I stumbled back into bed, snuggled under the warm comforter, and nestled into my pillow, all the while thanking God for his early-morning Sabbath wake-up surprise sent especially to me.

In the afternoon I watched brilliant orange butterlies defy the strong wind and flit around patches of yellow flowers on a rock overlooking the sea. At one point, a small furry rodent ran from one patch to another, then blended into the grey dirt. A large dragonfly, wings glinting shiny in the sun, landed on Jonathan's leg, content to be shielded from the buffeting wind for several minutes. Overhead seagulls soared, occasionally dropping to the sand below for a bite to eat. A shadowy cormorant bobbed in the waves, then dove underwater. Later Jonathan and I wandered along the beach, stopping to snap pictures of crabs, sand dollars and interesting shells, bird footprints, spray flying backward from the waves pushing into shore.

And still later, as we pulled into the driveway, we startled a mother deer and her two fawns. They dashed behind a curve of trees as Jonathan slammed on the brakes. He inched forward, and we watched fascinated as the deer foraged leisurely and then strolled into the brush. A perfect Sabbath day packed full of God's gifts in nature. 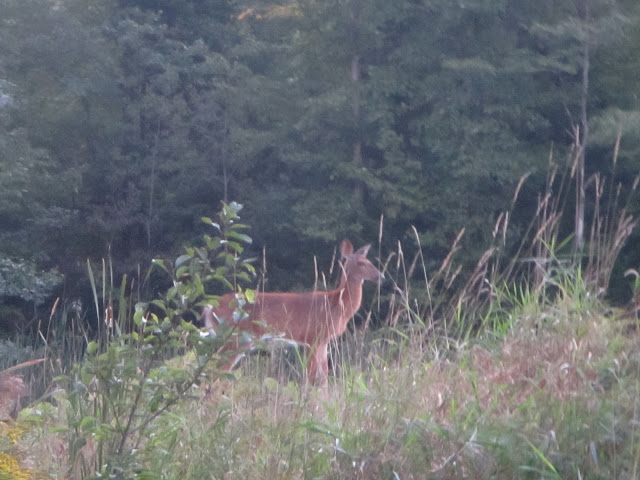 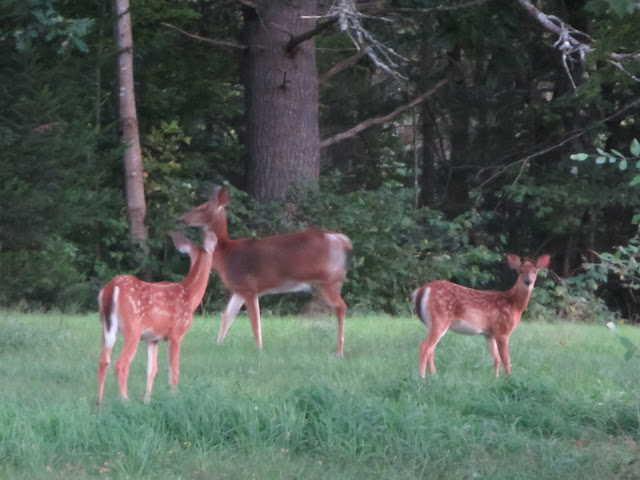