Electrical pole fire in our back woods

On Monday of last week (April 22, 2013) Jonathan and I heard a helicopter flying near our house in the mid-afternoon. We occasionally hear small airplanes flying overhead after taking off from the tiny airstrip in Old Town, but this helicopter sounded a lot closer than those airplanes do. Suddenly it was right above our house, sounding like it might want to land right on top of us. I raced to our bedroom window and watched as a white and green helicopter circled our back field several times before landing near the woods. Then red shapes and bright lights over to the right of the small bit of woods that separate our landlady's land from the neighbours drew my attention. Fire trucks with their lights on. A streak of flame flared up in the woods and I yelled out, "Jonathan, there's a fire!" My excitement was not over the fact that the fire could potentially burn its way over to our hours, but rather that this was a prime picture-taking opportunity and we had a large helicopter in our back field. "Grab your camera! Let's go outside," I shouted, as I scooped up my small camera and ran for the door.

Outside I found a bush fire truck in our driveway and firefighters in yellow jackets methodically gathering supplies. Jonathan and I hurried around to the back of the house, and found our landlady's daughter, Patty, talking to a man. She introduced us to him and we found out he was our neighbour living to the left of the field. Then she filled us in on the fire. "I was washing dishes when I looked out the window and saw flames shooting up toward the sky. I called 911, but they weren't very helpful. They asked me all kinds of questions that didn't seem very pertinent to my reporting a fire. Can you believe they asked for my address, and when I gave them my mother's address here, they said they wanted my personal address, in New Hampshire?" Patty went on to tell us that after her call to 911, she called the neighbour and told him about the fire. His nephew is a volunteer firefighter in the town and he alerted the fire department to the fire. Patty and the neighbour then told us the flames were from an electrical pole that was burning.

Jonathan walked out in the field, but out of the way of the firefighters who had headed that direction, to see if he could take some pictures of the pole. Then another neighbour, Ken, the man who does odd jobs for our landlady, and another man drove up on some quads and asked Jonathan if he wanted to see the pole from a better angle, over by the house it was nearest, where three or four more fire trucks were congregated. Jonathan hopped on the back of Ken's quad and they raced away to the action. I found a place to sit down where I could see both the flames and the helicopter. The firefighters that had headed across the field had brought a water bucket out to the helicopter, and soon it rose back into the air again. I have a love of all things that fly, and I was thrilled to get a personal viewing of aerial firefighting. The helicopter headed off for the river, and returned a few minutes later with a bucket-full of water, which it dropped in the woods around the electrical pole (obviously not actually on the pole, though). Back and forth it went between the river and the woods, bringing buckets of water with it to ensure the fire didn't spread to the woods surrounding the pole. I sat in the dry grass of the field staring at the sky in awe as the helicopter appeared each trips and circled overhead. Far too soon the action was over, the flames on the pole went out (Jonathan later told me that the wind eventually blew the flames out), and the helicopter landed in the field again to return the bucket. I watched as the helicopter soared back into the air, circled around the woods several more times, making sure there were no errant flames, then left the scene. The excitement (especially watching the helicopter) was the highlight of the day, and actually of the entire week! 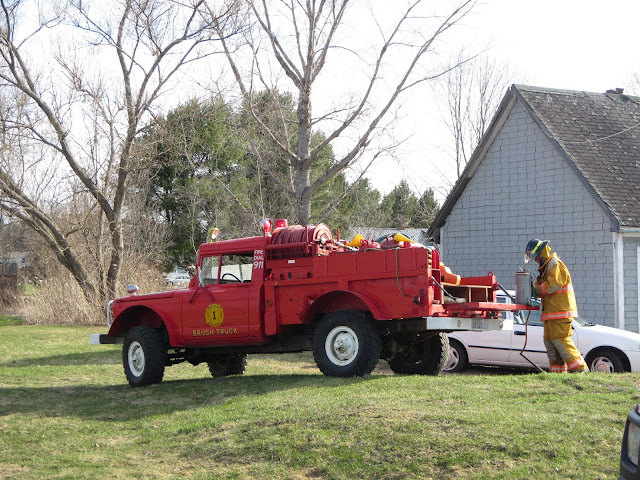 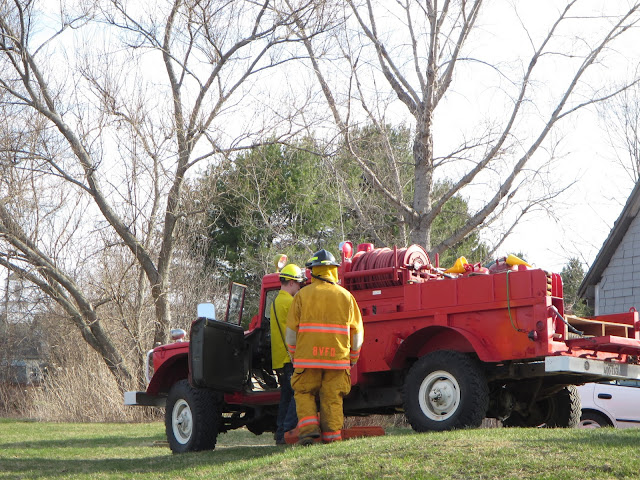 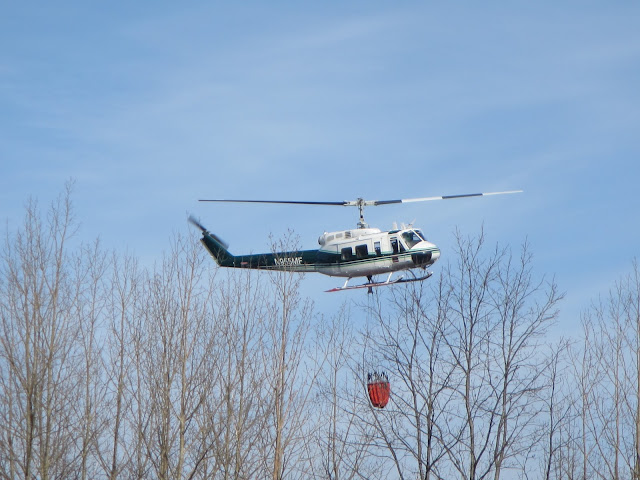 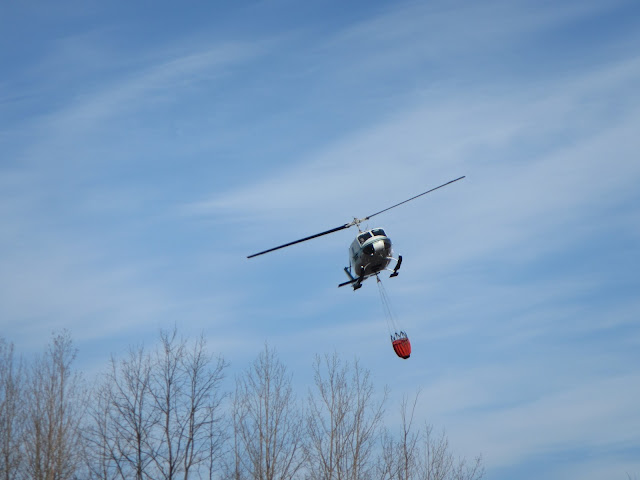 I stole a few pictures from Jonathan, so I could share his perspective from the other side of the woods, too.
Posted by Ali at 21:12